What was Rationing? Rationing was a system that provided everyone with the same amount of scarce goods. The system was designed to keep prices low and to make sure people had what they needed.

Sugar and coffee were very scarce. They didn't make Coca-Cola during the war because sugar was so scarce. Other things disappeared entirely as well, like silk stockings. New things were made of wood instead of metal or rubber.

But rationing made sure no one went hungry. Everyone was given a ration book. Each book had a bunch of ration stamps in it. Grocers and other business people would post what your ration stamps could buy that week. It was up to you to decide how to spend your stamps.

Although tiny in size, ration stamps packed a whollop. You had to have ration stamps to buy things at the store. It still cost money, but you couldn't even buy it unless you had stamps.

Here is a close-up picture of real ration stamps. 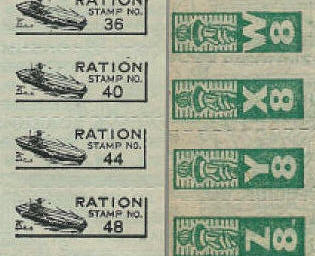 The instructions on the back of the booklet read:

1. This book is valuable. Don't lose it.

2. Each stamp authorizes you to purchase rationed goods in the quantities and at the times designated by the Office of Price Administration. Without the stamps you will be unable to purchase these goods.

3. Detailed instructions concerning the use of the book and the stamps will be issued. Watch for those instructions so that you will know how to use your book and stamps. Your Local War Price and Rationing Board can give you full information.

4. Do not throw this book away when all of the stamps have been used, or when the time for their use has expired. You may be required to present this book when you apply for subsequent books.

Rationing is a vital part of your country's war effort. Any attempt to violate the rules is an effort to deny someone his share and will create hardship and help the enemy.

This book is your Government's assurance of your right to buy your share of certain goods made scarce by war. Price ceilings have also been established for your protection. Dealers must post these prices conspicuously. Don't pay more. Give your whole support to rationing and thereby conserve our vital goods. Be guided by the rule: "If you don't need it, DON'T BUY IT."

Victory Gardens: People were encouraged by the government to plant Victory Gardens and grow their own vegetables to supplement the foods they could buy with their ration stamps. Victory Gardens were planted at the zoos, at race tracks, at Ellis Island and Alcatraz, at playgrounds, in school yards, in back-yards, at the library, in grassy bits in parking lots emptied by gas rationing - absolutely everywhere.

For Americans at home, living without was not that difficult. Many people remembered the Depression. By comparison, things were not that bad. Most people were glad to have some way to help, to take an active part in the war. They pitched in to help. Americans accepted rationing. They did without consumer goods happily. They even had fun with it. At that time, nylon stockings had a line up the back. Women couldn't buy stockings, but they could paint the back of their legs with a line, and many did.

Patricia Thomas Faust was a small child in Phoenix, Arizona during the war. "I would go to the store with my mother, and I remember how careful we had to be. You had to have this stamp for this and another stamp for something else. And you made everything go as far as you could. One thing we couldn't get was butter -- we had to use oleo. Oleo was white and didn't look like butter so they gave you a bowl of yellow dye to mix with it. That was my job -- to mix the two together." (Patricia Thomas Faust, Interview by Margaret Brooks, October 28, 1991. Reprinted by permission.)

Back to Home Front Unit